A Lasting Legacy: the Incredible Story of Louis & Irene Rotta and Al McGarr

A Lasting Legacy: the Incredible Story of Louis & Irene Rotta and Al McGarr 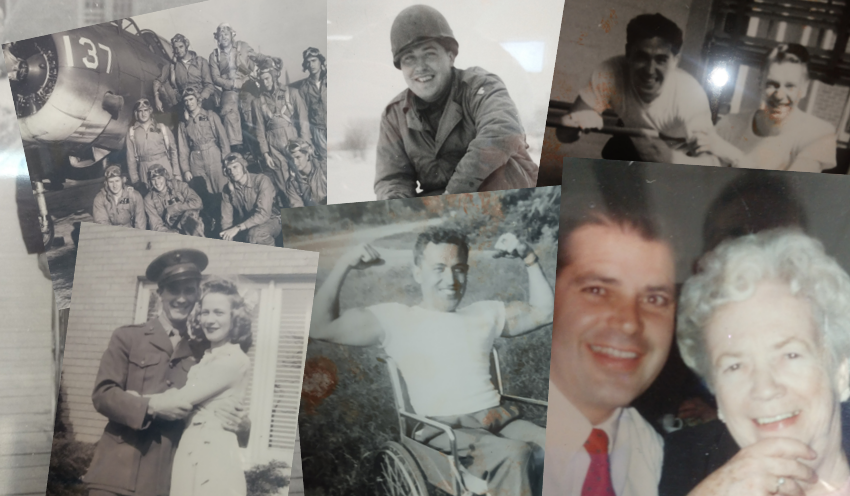 At the HawkSoft National User Group Conference in San Diego this month, HawkSoft was honored to announce Kevin Dougherty of Kevin S. Dougherty Insurance Agency, Ltd. as the winner of this year’s Dick Fanazick award. The Dick Fanazick award honors people who have made a profound impact in the lives of our HawkSoft agents, and we received many wonderful nominations for the award.

We’d like to share one such nomination with you as an honorable mention. While the people nominated have passed and thus are not eligible to receive the award, it’s an inspiring story that exemplifies the spirit of the Dick Fanazick award. Lou Rotta, a HawkSoft customer and agent at Quantum Insurance Group in Illinois, shared the incredible story of two soldiers and a nurse during World War II who changed his life forever. 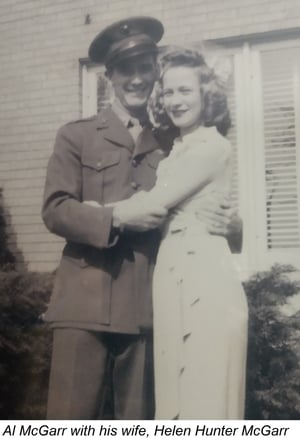 The story starts with the McGarr family, a Irish Catholic family living on the north side of Chicago during World War II. Their son, Al, was desperate to enlist, but was young enough that the permission of his parents was required. They refused to give their permission at first, but when Al said he just wanted to keep his younger sister Irene safe, they were touched and allowed him to join.

Al started in the Navy, then joined the Marines. He was stationed in the South Pacific, where he was the lead pilot for a Dauntless 2-man dive bomber. In December of 1944, his aircraft was shot down over the Marshall Islands while on a mission.

The news of Al’s death was devastating to his family—especially to Irene, with whom he had been especially close. Irene, who was around 20 at the time, was already going to school to become a nurse like her two older sisters, and was in training in a military program. Profoundly affected by the loss of her brother, she promised she would live her life to honor his sacrifice. She asked to be assigned to the paraplegic ward at Hines Hospital in Maywood, IL, to care for severely injured soldiers returning from war.

Profoundly affected by the death of her brother in the line of duty, Irene asked to be assigned to a paraplegic ward to care for severely injured soldiers.

Around the same time, another young man from Chicago was stationed in the South Pacific. Louis D. Rotta had been drafted into the Army and after training in California, Hawaii, and Guam, was part of the Battle of Leyte Gulf, considered one of the largest naval battles of World War II, to take the Philippines back from Japanese forces. Injured in the battle and suffering from jungle rot, he was sent to Guam to heal. Less than a year later, he was part of the Army’s joint landing with the Marines in Okinawa, Japan—the last island the Allied Forces needed to control in order to stage an attack on mainland Japan. 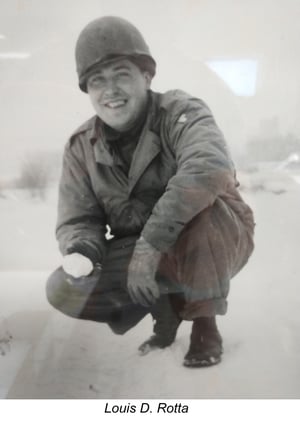 The Battle of Okinawa began on April 1 of 1945 and lasted nearly three months, resulting in over 49,000 casualties for the United States. Louis, who was a skilled mathematician that calculated trajectories for artillery, was stationed in the heat of the battle. Only three days after the landing and about four months after the death of Al McGarr, he was caught in a mortar barrage during which a piece of shrapnel entered underneath his arm and sliced through his body. Despite a medic pronouncing he would not live, Louis’s sergeant, Wally Plank, carried him over a mile to safety.

Caught in a mortar barrage, Louis was injured by a piece of shrapnel and rendered paralyzed from the waist down.

Louis did indeed live, but he was rendered paralyzed from the waist down—unable to walk, control his bowels, or have children for the remainder of his life. He stayed on a hospital ship in Japan until several months after the end of the war, when he returned home to Illinois. With no way to care for their paraplegic son, his parents sent him to the nearby Hines Hospital for rehabilitation and care. It was there that Louis met Irene.

A family is born

Louis came to know Irene as she cared for him and the others in the paraplegic ward. He admired her kindness and strength, and she admired his perpetual optimism and refusal to let his disability stop him from doing anything he put his mind to, including participating in one of the first wheelchair basketball teams in the country. In 1950, after having spent several years at Hines Hospital, Louis asked Irene to marry him. She agreed wholeheartedly, despite her Irish Catholic family’s shock and her desire to raise children someday. 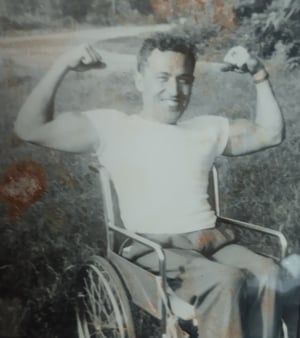 Louis went on to obtain his high school education, which he hadn’t completed before the war, and then attended DePaul University in Chicago to get his degree in Commerce and Accounting. Because there were no ADA regulations at the time, much of the campus was not accessible by wheelchair, and Louis had to be carried between classes by other students. During this time Irene worked as a nurse for a boy who had been badly burned and needed individual care.

Louis and Irene dearly wanted to raise children and attempted to adopt for over five years, but were declined by Catholic charities and the state of Illinois due to Louis being pronounced an “unfit” father because of his paraplegia. However, they were eventually able to adopt privately when a friend of Irene’s got them in contact with an unmarried 16 year old girl in the area who was pregnant and looking to give her son up for adoption. In May of 1955, Louis and Irene welcomed the 3-day-old baby boy into their home and named him Lou, after the incredible legacy of his father.

After five years of unsuccessful attempts to adopt a child, Louis and Irene welcomed a 3-day-old baby boy into their home and named him Lou, after the incredible legacy of his father.

While Louis and Irene have both passed, their legacy made a lasting impression on their son. “Growing up, the wheelchair was invisible to me,” Lou says. “Dad taught me every sport: basketball, football, fishing, bowling. He worked in the garden with us. There was nothing he couldn’t do.”

Watching his parents taught Lou determination and perseverance. “One thing I’ve learned from them is not to take anything for granted,” he says. “You have to go out and earn it, make it happen. Be patient, but always work toward what you want. Complain? Not so much. My parents showed me that our only roadblocks are in our minds. They wanted to go out there and raise children and enjoy their lives, and they did. Those are the lessons I hope I’ve passed on to my children and grandkids.” 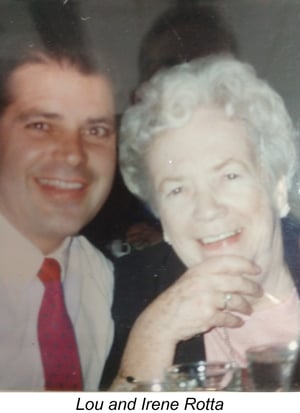 Lou met Kathy, his wife of 44 years, while attending Quincy College in Illinois, and he knew he wanted to raise and care for a family like his own parents had. Louis and Kathy had four children over the years, and now have grandkids as well. “The insurance industry allowed me to almost never miss anything that my children and family were involved in,” Lou says. “It’s a great industry to have the flexibility you need to be there for your family.”

Lou became involved in insurance after college, when he participated in an “earn while you learn” program in Minnesota with a direct writing company. After living there for a year and learning about the insurance business, he was placed in a territory where he handled 10 counties in southwestern Illinois. After his father passed away, he decided to move back to his hometown of Elmhurst and was given a territory there.

“The insurance industry allowed me to almost never miss anything that my children and family were involved in. It’s a great industry to have the flexibility you need to be there for your family.”

After 15 years with the company, Lou eventually decided to become an independent agent. “I didn’t want to be controlled by a direct writer anymore,” he says. “I wanted to be independent and be able to work with clients of my choosing and have my own carrier relationships to service them.” In 1992, Lou and Kathy bought a small insurance agency, and over the years acquired another several agencies. Now, Lou is getting close to retirement and is working with two sons of a good friend of his, who will be taking over the agency when he retires.

“It’s been a joyful run for me,” he says of his 44-year career in insurance. “I’ve learned so many wonderful skills from being an agent. Insurance is the only industry that after a terrible situation can make someone whole, or help businesses stay afloat. The relationships you make stay with you for a long time. I teach my clients about insurance, and they teach me too, about business and about life. It’s a beautiful exchange.”

The gift of a lifetime

Lou’s parents instilled in him an endless sense of gratitude: “Every day I wake up knowing I’ll never be able to repay my uncle who died for the cause of liberty and freedom, or my father who suffered a terrible injury, or my mother who served so many wounded soldiers. Every day I thank my lucky stars that they were my mom and dad. I was given a more beautiful life than I could ever deserve. To have the chance to get up in the morning and just have a swing at life is something I’m grateful for.”

“Every day I wake up knowing I’ll never be able to repay my uncle who died for the cause of liberty and freedom, or my father who suffered a terrible injury, or my mother who served so many wounded soldiers. To have the chance to get up in the morning and just have a swing at life is something I’m grateful for.”

"An Attitude of Gratitude" is one of HawkSoft’s core values, and we’d like to extend our deepest gratitude to the Rottas, the McGarrs, and everyone who serves our country in any capacity. As Louis, Al, and Irene demonstrated through their selfless sacrifice, each life has the potential to affect countless others for good. 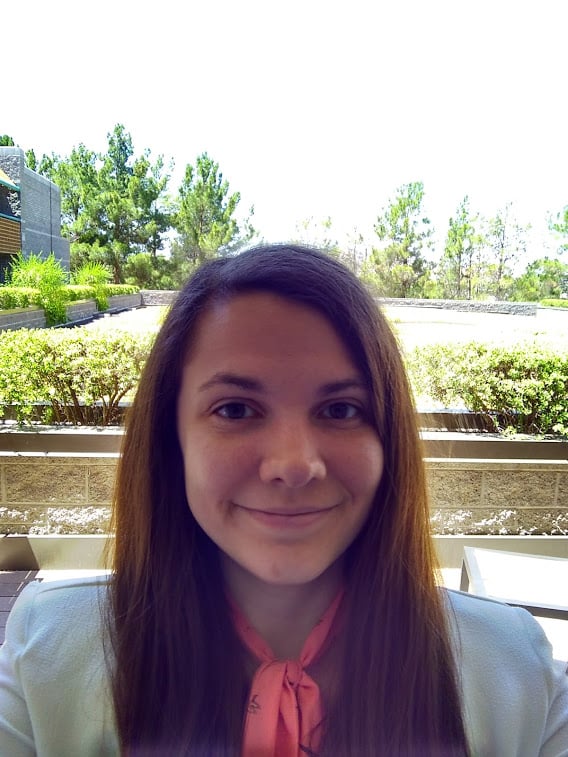 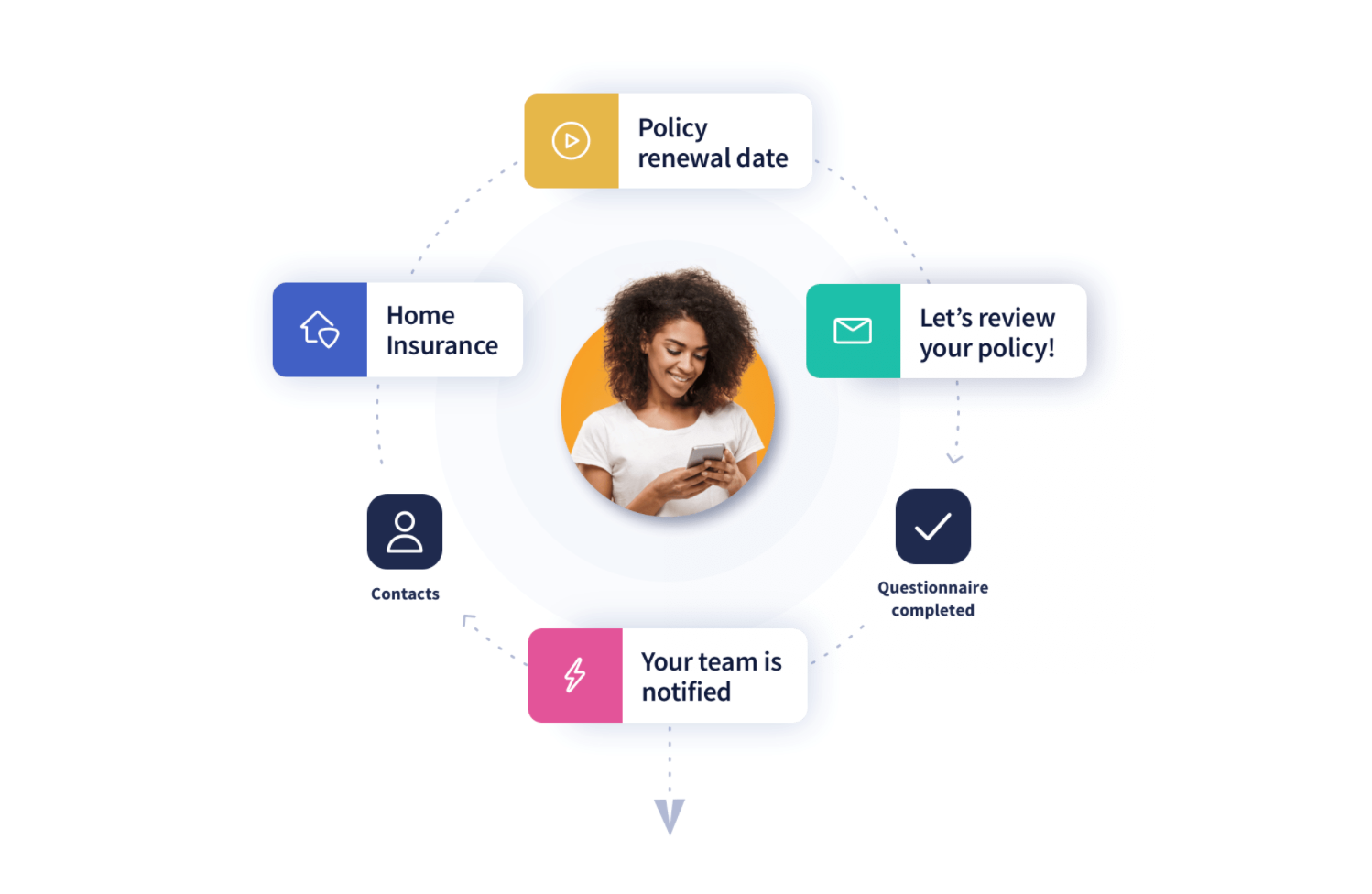 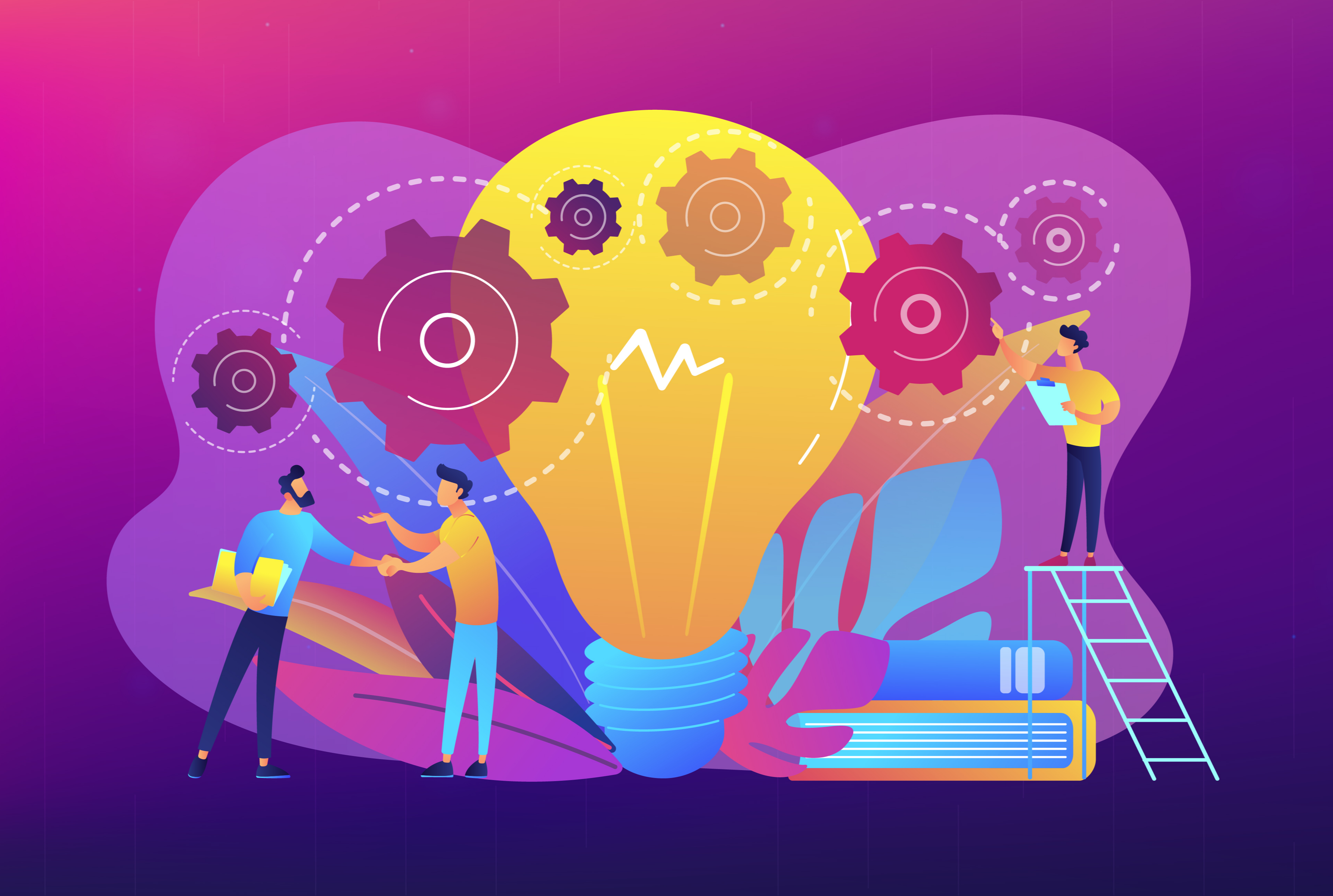 The Guaranteed Way to Get More Referrals from Loan Officers END_OF_DOCUMENT_TOKEN_TO_BE_REPLACED

Changes to HawkSoft Text Messaging due to 10DLC END_OF_DOCUMENT_TOKEN_TO_BE_REPLACED